Manufacturing sector has been the growth engine of the global economy for the better part of the last two centuries. The transition from an agrarian to manufacturing economy is still an important indicator of growth, prosperity and rise in living standards for a country.

For developing nations, improving and investing in the manufacturing sector continue to be a strategic focus area. Even for a country like India, which has a robust service sector with close to 57% of the economy in 2016 mainly driven by global services trade from information technology and business process outsourcing industries, building up the manufacturing sector is a sign of development and rise in living standards. 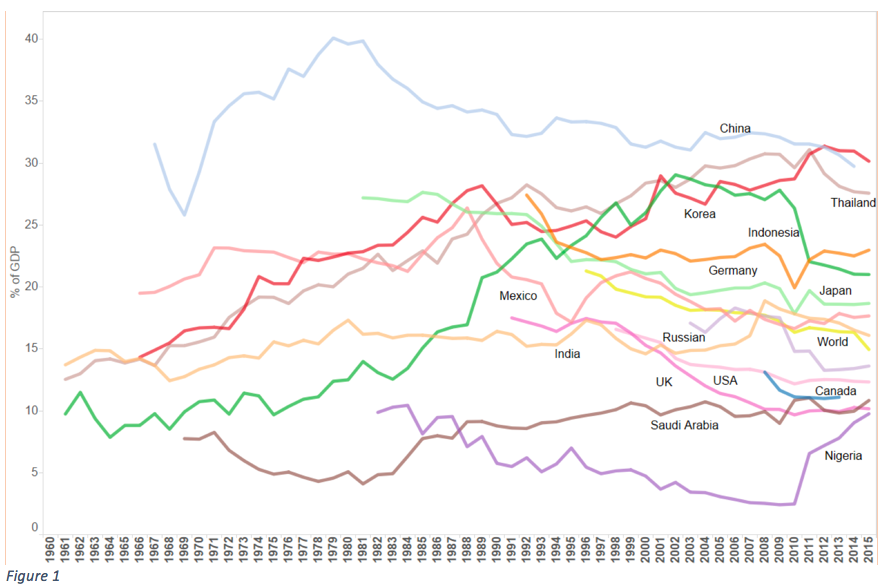 The above diagram shows the percentage of total GDP coming from the manufacturing sector. For rapidly developing countries such as China, Thailand, India and Indonesia, manufacturing sector plays a significant role in boosting their GDP growth. Sufficient skilled labor, improving and adept infrastructure, settled supply chain networks, favorable investment and tax policies and strong support from government are all vital ingredients to promote the development of manufacturing industry.

GDP has close ties with the supply chain initiatives and over all strategies for the manufacturing industry. Global companies such as Fed Ex use GDP predictions to plan their future investments in a country. Everything from demand planning, price of raw material, labor, inventory etc. is tied to GDP to a certain extent. 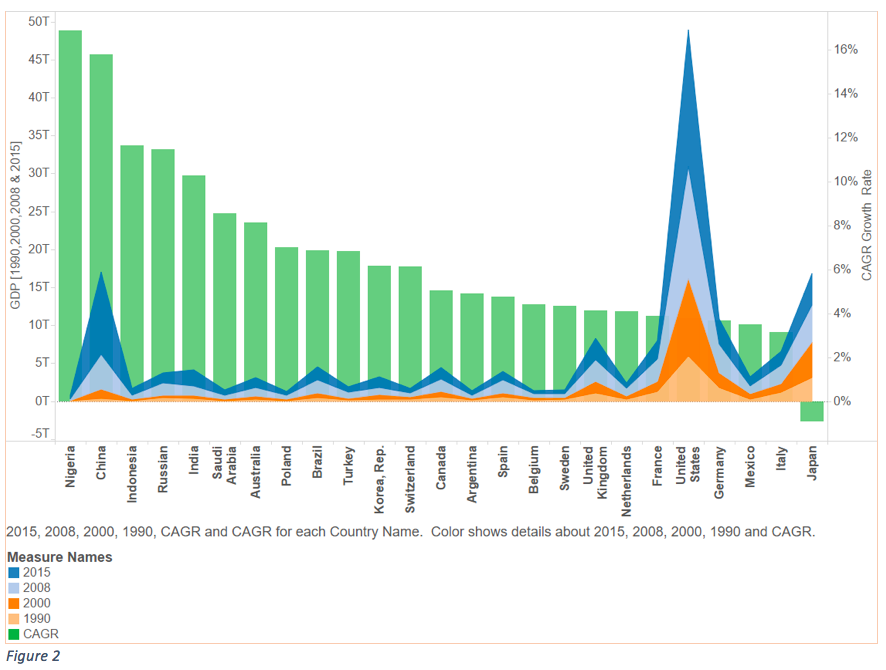 If we see the historical GDP figures from 1990 to 2015 for the top 25 biggest economies on an area chart above, it is evident how Unites States dwarfs other countries in terms of the sheer size of the economy. Other visible high peaks knowingly include Japan, China, United Kingdom and Germany.

The measure of the compounded annual growth rate (CAGR) between 2000 and 2015 brings forth an interesting picture. CAGR marked by the bar chart on the second axis in figure 2 showcases the fastest developing major economies. The BRIC nations along with Indonesia, Saudi Arabia and Nigeria are on the top half of the fastest growing economies in the last fifteen years. If these countries can sustain these enviable figures for the next few decades, a change in the world order is definitely on the cards, especially with the current trend of lower GDP growth rates seen within the developed nations. 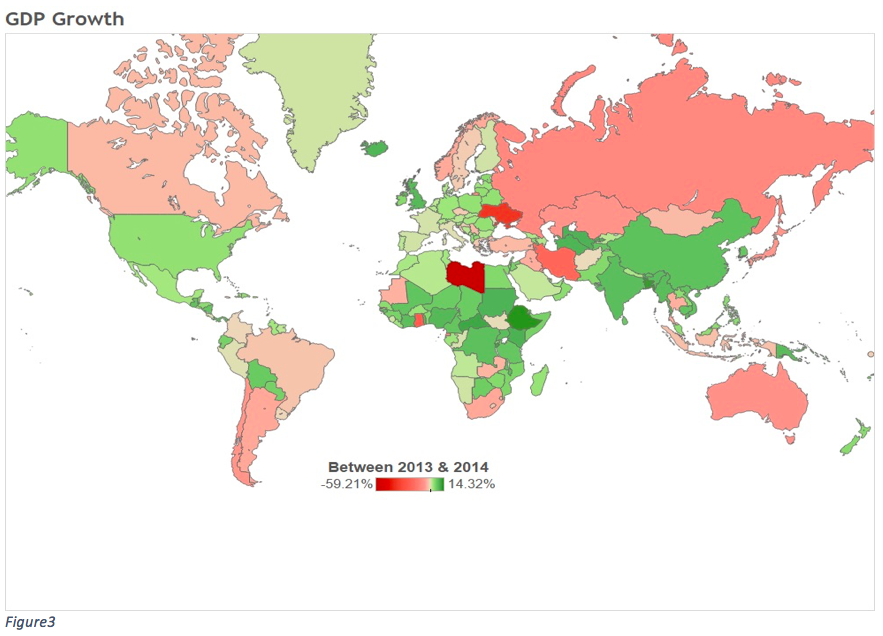 The above world map showcases the GDP growth between 2013 & 2014 and without any surprises China and India come under the dark green shade – fastest growing major economies. One can also see the devastating effect of the Libyan civil war on the country’s economy with GDP contracting manifolds during the same period.

With globalization and international markets today’s businesses have become complex to manage. For efficient demand planning and forecasting a thorough understanding of the current economic trends and GDP is paramount.

Furthermore, for industries and manufacturing companies, choosing the right manufacturing location is one of the critical decisions to be made. When it comes to deploying its future supply chain strategy such as where to manufacture its products, a company should also take economic forecasts and manufacturing sector growth into consideration.

Emerging market undoubtedly is a good location strategy for businesses. Not only because these countries are equipped with elaborate supply chain, labor, technology and infrastructure but also they are the future target consumer markets. A forecast from McKinsey mentioned that “By 2025, it is estimated that developing economies could account for nearly 70 percent of global demand for manufactured goods.”

For example, Apple sees India having a potential for huge market for its flagship product iPhone, where it plans to open its newest manufacturing plant. Though traditionally the cost of iPhones was considered expensive for the Indian market, the rise in disposable income and healthy middle class segment in India has made it affordable for people to use Apple products. The decision to open a manufacturing/assembling plant in India in partnership with Taiwanese based smartphone manufacturer Wistron would certainly have been made after carefully considering all the economic factors apart from seeing solid sales growth of above 50% between 2015 and 2016, corresponding to over 2.5 million iPhone units.

Moving forward business leaders and decision makers have to be agile and flexible with regards to the turbulent worldwide dynamics of GDP growth and manufacturing development, tapping into the opportunities and being prepared for challenges in the near future.

Predicting growth, GDP etc. would never going to be straight forward but understanding what creates value for your business from goods, services, revenue to knowledge-technical knowhow and other intangible benefits such as customer loyalty would certainly guide in making well-informed future decisions. And don’t be wary of using predictive statistical methods, something I’ll touch in my next blog, there are quite a few business softwares out there in the market that can run complex forecasting models for you.