Automobile manufacturers are constantly driving their cars into crash structures to see how they stand up. When was the last time that you crash tested your supply chain? What would have happened to your supply chain if Apple had experienced the Samsung battery problem?

A year ago no one could have predicted that the number 2 smartphone company would be in disaster recovery mode due to safety issues with their phones. Obviously their sales will be impacted from a loss of customer confidence that may take years to restore. Unfortunately for Samsung, their washing machines are also failing, exacerbating the confidence issue. This consumer doubt will not be isolated to the problem products and will spill over to the entire brand because great companies shouldn’t have such major failures. Have they lost their way? Samsung is not the only great company to experience such catastrophe; remember Toyota’s run away car acceleration, BlackBerry Limited’s   BlackBerry® device security issue and Keurig’s exploding K-Cup®pods?

Quality issues are just one cause of significant harm to customer confidence and market share loss. High tech companies (such as Apple) are vulnerable to differentiating and disruptive technology change from current and would be competitors which can destroy market share. Many hardware appliances have had their markets destroyed, replaced by smartphone ability and apps; iPhone® mobile device examples are cameras, MP3 players, GPS devices, health monitors and carpenter’s levels (to name a few).  Almost every high tech electronics and software company in the world would like to significantly invade Apple’s envious market position providing an innovative, intelligent and aggressive set of competitors for Apple to defend against and who, at any time, could launch a killer product against Apple’s offering.

Change happens and can happen quickly. Most supply chains have been set up to absorb some level of shock but a stumble by someone of Apple’s size would result not merely in a supply chain ripple, but a tsunami. The impact to EMS supply chains could be greater than the 1999-2002 telecom meltdown and it may not even be an industry wide issue.

Electronic supply chains usually contain EMS partners with component and hardware manufacturers. These companies are often serviced by distributors. Each is positioned with and has title to inventory that, in the case of a shock event, may not be convertible to cash to keep their company alive.

Altman Z-scores are a good means of assessing a company’s exposure to business failure but this metric has an inherent assumption that business environmental conditions are normal, not completely disrupted due to a tsunami like catastrophe. Clearly, if such an event occurred, low Altman Z-score companies in the effected supply chain would be wiped out but so would some companies with high scores. The Altman Z-score considers cash only through current assets which also include inventory, so a high score is no assurance of access to adequate cash for survival. Cash is king! An analysis of supply chain companies (by type) from publicly available data, based solely on Altman Z-scores, shows 30% of distribution companies, 7% of EMS and 32% of component companies could not withstand a shock. None of the distribution companies assessed – including the major ones – are in the Altman safe zone. Additionally, only 61% of the EMS and 45% of the component companies reviewed  qualify as safe; this is not good.

Foxconn (Hon Hai) is a major EMS in Apple’s supply chain.  It has grown with Apple’s success so that, in revenue terms, Foxconn is not only the biggest EMS but is also bigger than the next 5 competitors combined. 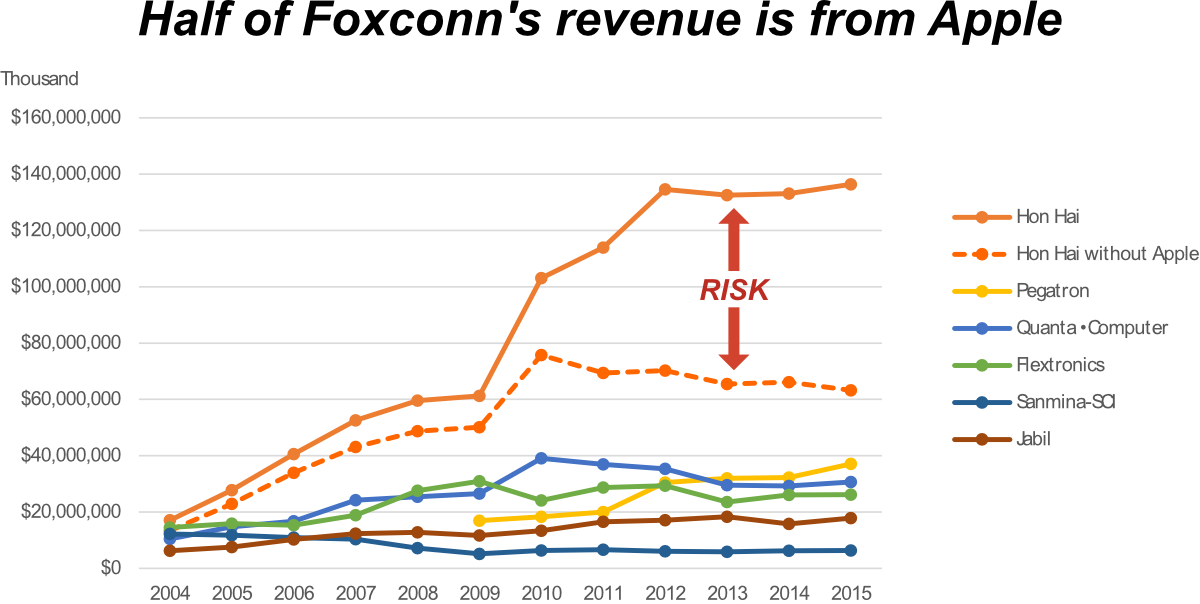 While my analysis of Foxconn is subject to inaccuracy, it reveals a strong dependency on Apple which makes up about ½ of their business. Even if the analysis is grossly off, the magnitude remains significant for the risk scenario being described. The size of this Apple related business is greater than the EMS telecom business before the 2000 meltdown. I believe that both Apple and Foxconn could survive a tsunami like shock but it’s a different story for their suppliers.

If such an event were to occur, huge amounts of inventory would become stuck in the supply chain and would be difficult to convert to cash in the short to mid -term at any reasonable value as compared to cost.

The good news is that the competitor with a differentiated, killer product would be growing at an impressive rate, creating opportunity for manufacturers and suppliers chosen to be in their supply chain. For fortunate companies, those in the new supply chain and some within both the old and the new, there is opportunity and hope. For those only in the old, there is despair at best.

You need to know three important things about the suppliers and manufacturers in your supply chain:

Do your manufacturers and suppliers pass the Supply Chain Crash Test?

Ken Bradley is the founder of Lytica Inc., a provider of supply chain analytics tools and Silecta Inc., a SCM Operations consultancy.